As a keyworker I  have been staying in Airbnbs between jobs. Now, there are two things that frustrate me in life generally. People who don’t make an effort when first meeting others and those who don’t check their facts! 😉

So just imagine how disgruntled I felt by a very lukewarm reception at my new Airbnb.

I had just spoken to my Airbnb host over the phone and he assured me it was okay to arrive.

I had seen his photograph on the host page but sometimes these can be quite misleading.

The man opening the door seemed to fit the bill.

My good friend Irma and I seemed to worry the man at the door. In fact he looked quite perplexed.

Nevertheless, undaunted I said, ‘ So is it okay to start bringing my things in?’

At this point I checked the number at the side of the door. Yes definitely number two.

This did nothing to satisfy the man in the doorway, blocking our entrance.

And then Irma, because she’s the sensible one said, ‘Is this the Airbnb?’

The man shook his head and said there’s no Airbnb here.

Mild panic began to set in as I saw not a few hundred but a couple of thousand pound wafting away into the ether.

Irma knocked the door again and said to the man. ‘So, this is definitely not an Airbnb?’ and checked his name.

He was sure it wasn’t the location or indeed his name.

So I quickly redialed the number that I had used before, fully expecting to hear a phone ringing just inside the door.

And people often ask me where I find ideas for my stories.

Basically I get out of bed, get dressed and go out the front door and they just seem to happen.

That poor man. His face when not one but two strange women insisted on bringing ‘their’ worldly goods into his home.

I should point out that I was the only one moving in. Irma and I have been in a ‘carer bubble for around 12 months’ and she kindly drives me between clients and wherever I lay my head in between.

Did he think we were a new breed of women ‘selling’ religion door to door maybe; where they actually set up in your living room until you give in?

Needless to say the information on Airbnb was correct and I had managed to write down the address in my diary incorrectly.

I really felt so sorry for the guy at number 2.

Later, I posted a note through his door profusely apologizing.

Now I need to find a dentist.

Heaven help me if it turns out to be him!

Like all carers we have to be adaptable. People, pets and household gadgets but there is one item that is becoming more popular that drives me nuts…

Peaceful porridge in the 21st century.

Beep, flippin’ beep. Give me a knob any day. Turn it on, turn it off. With the advent of ceramic hobs I can honestly say I can use the word hate. I hate having to put on my glasses so I don’t inadvertently tap the locked symbol. And who wants to  hear that screeching beep first thing in the morning? So, tap the on/off. Nope, nothing happening. Press harder. Then tap which plate. Next, the + or – for each increment of heat and yes, it BEEPS every time. It heats up quickly, I’ll give it that. Now you want to turn it down. Back on with the glasses. Locate plate. Beep. Locate up or down. Beep. Finally porridge is cooked. You remove the pan from the heat. And just when you think you can relax you get one last beeeeep! Seriously? Meanwhile be careful that the overhead extractor is switched on or the ridiculously sensitive smoke detector will outdo anything your ceramic hob can muster!

Anyone know how to make porridge on the barbecue?

P.s. And yep, my latest Airbnb has a ceramic hob! The universe is mocking me.

This month’s dip into the goody bag and voila…

Ruhl Plage: The card that had the bill inside, after my breakfast at the beach. 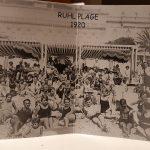 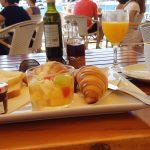 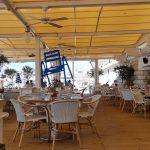 I always give myself this treat each time I am in Nice. Yes, you can get the same breakfast cheaper a couple streets back from the promenade d’anglais but there is something so wonderfully relaxing about the gentle breeze and the sound of the waves lapping against the pebble beach. I’ve said it many times but treating the five senses is something we all deserve as caregivers, from time to time.  And this place is still in my top ten. And in case you think I take this 5 senses/memory thing too far…You won’t want to know that I still have a recording of the background sounds ( waves and Madonna) with my mate Karen and I sitting at that cafe, a few years ago.

When I look back on so many happy memories I sometimes wonder if our clients mostly in their 80’s and 90’s, have one overriding memory. Something they would change if they could?

Some clients are very happy to talk about their lives and others say very little.

Some years ago I suddenly asked a client with whom I had a real rapport whether, if he could…what one thing would he go back and change?

What was astonishing was the speed of his reply! It was as if he had been waiting all his life for someone to ask this question.

His wish was this. He would like to have prevented his mother from having two miscarriages. He said the anguish that this caused his parents had stayed with him. Then after a slight pause, as if feeling guilty/selfish? he added. And I would have had two brothers instead of being an only child.

I haven’t broached this question with every client but when I have the men always have an answer and so far women take far longer to consider their thoughts.

Anyone else asked this question of their clients?

Oh and that pet peeve with other carers I was talking about last month.

Nothing earth shattering or life threatening but I just find it puzzling and annoying to be honest.

Why open two packets of the same thing? Why cut into two cucumbers?

They were both in the same cupboard/fridge. 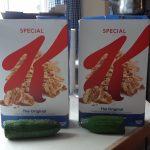 Coming up in June.

What do a French village doctor and an Irish car mechanic in Southampton have in common? Good advice!

And next from the goody bag: Au cafe with Colette and Madonna.

Plus.  It’s not okay for carers to have an uncomfortable bed.