Helen before the arrival of the 3 Ms. Men, mortgage and motors!

Cute and cuddly? Check out that right fist…

A nursing home in Moseley, Birmingham, UK. Probably has a plaque on the wall somewhere.

Her mother recently found and gave her the bill.11 pounds 4 shillings and 3 pence.

Frame it or ask for a refund?  Helen wonders if it is too late to sue the nursing home?

She is lactose intolerant. They gave her milk. She has evidence! 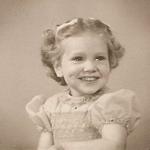 Luckily dimples and smocking were all the rage back then.

No men, motors or mortgages to worry about.

2nd!! Scarred for life. Never liked competitions since, thinking about it.

Obvioulsy rigged. I mean it would be like choosing Dorothy over Blanche in The Golden Girls.

Of course, the internet being what it is these days, the winner is quite likely to leave a comment on here.

Which will have to be moderated…naturally.

See. See. Not a happy bunny! Take my photograph.

OK. Just get on with it.

No good will come of it.

Grumpy was the look. 7 was not her lucky number.

3 years of competing for attention with a …brother!

Not to mention 2 years at day prison aka Primary school.

Neither Helen nor Lewis took up acting,

but they may have fooled a few grown-ups in the 60’s.

and is a successful, artist, author, entrepreneur.

Birmingham College of Food and Domestic Arts, as it was in the 70’s.

This student was often absent on Thursdays. Boardwork. More like, bored-work. Aka, wig making.

Have you any idea how tedious it is to take 3, yes 3, strands of hair at a time and weave into a mesh?

But at last the competition phobia could be laid to rest. First prize in the National Hairdressing  Teacher’s Association, competition. Champagne all round.  And Helen’s career path was set for the next few years.

Oh the 80’s. The glamour. Never miss an episode of Dallas.

It was a full time job, getting ready to go out.

An attempt at being posh in the 90’s.

If that look isn’t bordering on the supercilious, I’ll eat my hat.

Helen started her peripatetic lifestyle, still enjoyed to this day and she met the two most important men in her life.

November 2003.  BA Hons in Media Writing. What a great feeling. Not so much a competition with others, although of course it was, but a sense of achievement. No longer the blonde hairdresser from Burminghum. A place full of lovely friendly people but so is Sydney, San Francisco and the South of France.

If we only have one life…Then live it to the full.

Or as her nephew once said. You’ll be a long time dead.

The only life worth living is the one you create for yourself.

And this is almost it. South of France. Tick. Village. Tick. Feels like home? Not quite.

2008 and still searching. Hampered by being,single, female, self- employed and working outside France. Take a chance on me? Good title for a song.

And then one day on the road to Roquesteron, she found it. Tourrettes-sur-Loup, nestled atop of a hill at 400 metres, overlooking the Mediterranean.

And for those who missed it.

Originally broadcast on 8th May on RCF Radio. Angouleme.

It is I, chatting about two of my books, why I decided to self publish and the reasons for writing them.