It was in 2000 that I received my new Nokia mobile phone. I viewed it with trepidation. It would work a lot better than my previous one, the salesman assured me. I just had to get used to it. I was intrigued by its ability to play different tunes. Cool. I soon found myself listening for the various beeps it made. Ah. I knew this one. Missed call. The display showed no name, merely a time and date: 31.12.2048.  23:59:59  Strange. 1 second before the start of 2049.

The next day, at Uni, I showed this to various normal age students. I was 47, they were mostly 19. It amused them to help ‘the old one’ as I was often ( not very originally) called by a group of writing students. Comments ranged from, not possible; seeing apparently not meaning believing anymore, to, wow how did you do that? I never deleted it. It felt important.

It wasn’t until I was discussing the meaning of life over a particularly mellow Margaux whilst devouring some to- die- for Valencay with a skin hardened just enough to make the contrast with the creamy centre, exquisite, that it hit me.

Kate, aged 90 going on 47 was eyeing me with suspicion. In the years I had known her we had covered just about every subject you could think of, except this one. Kate, I said. Would you have lived your life differently if you had known how long you were going to live? She answered me in a heartbeat. Oh yes! I would have had a lot more sex. She was serious.

Now, this is a different question, I said. She gazed at me through her usual, after 8,alcoholic haze. If you could have your time over again, would you want to know your expiry date?  No, she said. That would be horrible!

Interesting. An extremely intelligent, worldly wise, afraid of nothing, woman, would love to have lived differently but wouldn’t want to have the chance to do so…

I was presented with a dilemma, a paradox if you will. One that I had to explore. What is our greatest fear. The unknown or certainty? That night I dreamt I was cleansing my face and a series of vertical lines, a hyroglyph of sorts appeared to be embedded in my forehead. The more I rubbed the clearer the lines became.

As dawn broke, I drifted in and out sleep, knowing from experience that recalling details before being fully awake was crucial. But I had it. As clear as day. The missed call from the future-my expiry date. The lines on my forehead, a barcode. All I had to do was to put it all together. So it began…What if? 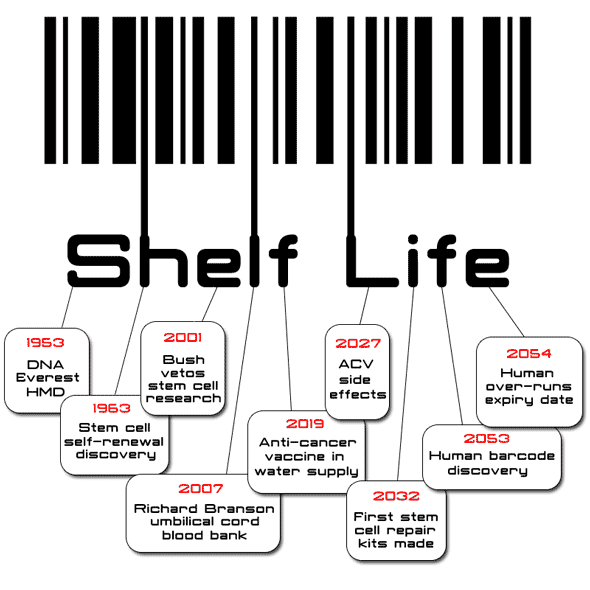 Shelf Life. EveryBODY has one.

Every hundred years or so, someone makes a remarkable discovery.

In 2053 it is Stevie Pinks who finds a barcode embedded in the human forehead. That barcode gives an expiry date. She soon discovers every adult human has one. Their own expiry date. But how many people would want to know their ShelfLife?

Since the introduction of stem cell repair kits in 2032, available at birth and the ability to repair oneself has become common place, life has improved. But it doesn’t alter the end date. Destiny is fixed. The route is not. However, it’s not the quantity but the quality of life that counts. Most people would agree…

The novella is available on amazon. Anyone who wants to read the screenplay, please email me. (That’ll be you, Noel) The screenplay that opens with Chiller pushing a cadaver on a trolley only to have the fright of his life a few seconds later… And Chiller doesn’t scare easy 😉

Click here to see more about Shelf Life on Amazon

2 Responses to “Shelf life – the book, the screenplay, the film”