Midlife inertia! You having a larf…?

So what exactly got my blood boiling recently?

Nothing to do with Trump,  Brexit  or even the dreaded Covid.

Nope it was an article in The Telegraph written by Kate Mulvey.

Of course she’s totally entitled to her opinion and I always find people’s ideas interesting but what really got my goat was the quote by the Norwegian University of Science and Technology who have announced that 54 is the specific age at which we struggle to motivate ourselves to try new things.

“As soon as you end up in your 50s a shift happens.” concludes professor Hermunder Sigmundsson.  “In theory it takes a lot more for us to actually do something.”

In other words we lose our get up and go!  And this is Kate Mulvey’s assertion that at the age of 56, ‘mine has well and truly got up and gone’.

Somebody came up with a study to tell us that 54 is the beginning of our wind down time?

It’s taken me two weeks to calm down sufficiently to write this piece and I was also interested to see that Kathy Lette mentioned it briefly and just dismissed it as rhubarb basically…and I guess that really is the best approach to this latest piece of research.

It’s one thing for a personal opinion but for science to tell us?

I ain’t having that.

At the age of 54 I was still patting myself on my back having gained a first class honours degree at the age of 50.

After 3 and a half very interesting years in Angouleme I made another move, this time to the south of France, for three reasons.

and it wasn’t cheap.

That southeast corner of France is hard to beat.

It was a no-brainer.

So they say that my get-up-and-go should have gone or even diminished at the age of 54? That is nothing short of laughable.

I spent the twelve months,  53 to  54  with my worldly goods in storage a short train ride away, inland from Nice Airport.

I spent the next 12 months in between UK care work and in Nice trawling the estate agents begging to be allowed to rent a small flat.

Everything was against me.

Female,  single,  self-employed and working outside of France

Everything a French  letting agent doesn’t  want to hear.

Eventually I wore one of them down.

The French go for lunch at midday

“You’re not going to give up until I find you somewhere are you?”

Back in 2007 it was possible to offer 12 months rent in advance as security.

Interestingly this turned out to be a win-win situation as the money was put into a Life Assurance policy in my name which gave 4% interest.

So whilst I paid my rent on time and didn’t burn down the place I had nothing to lose.

Much to the estate agents amusement I had three important criteria when renting a flat;

It had all three and I was very happy there  until one day driving with a friend through Tourrettes-sur-loup, I fell in love and moved again

Now ten years later so yes I’m 67 and I’m waiting for this midlife inertia to kick in.

Fine if you want to slow down, be my guest but for goodness sake don’t tell us it’s what we should be doing.

And by the way, doesn’t the wording of Professor Sigmundsson’s piece give a lot away…

This whole attitude implies being rudderless and without purpose and that’s what I really object to.

I guess it’s what I’ve always said and thought. 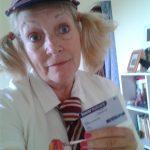