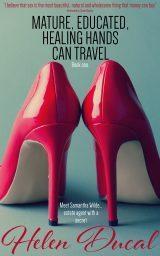 The two most important things in life
are sex and food.

After that comes love and money.

I believe that sex is the most beautiful, natural and wholesome thing that money can buy.

Out now! Available on amazon.

Book One in the Samantha Wilde series.

PROLOGUE.
I could say ‘It just happened’ but then I’m not a man and of course it didn’t.
It all started with the less than desirable Christmas and birthday presents.
After a little persuasion people started giving me gift tokens, then record and at last book tokens but this was soon followed mercifully, by ‘Here you might as well have the money and buy what you really want’…Result!

Many years later I considered mentioning this concept to my newly acquired ardent admirer who insisted on whisking me off to Fortnum and Masons, to perch precariously on a mahogany stool in the Oyster Bar for a dozen of the same, which I can live without, quaffed down with some vintage champagne, which I don’t really like, only then for him to pay for a hotel room, knowing full well that we will be out of there in a couple of hours. And all so he can get laid.