*KHAMAILEON: A maternity suit and even DNA cannot help her.

I was inspired to write Khamaileon by three very different women whose lives were devastated by varying degrees of manipulation and assumptions.

An English woman was released in 2003 having been wrongfully imprisoned for more than 3 years, falsely accused of the murder of her two sons. Sadly, she never fully recovered from the effects of this appalling miscarriage of justice.

An American woman, a proud mother who faced the most unusual of challenges, couldn’t prove her children were her own through a simple DNA test. Finally, doctors told her she had a rare disorder, chimera. i.e. she is her own twin.

And any woman who has been duped, primarily, into producing a son and heir or two. 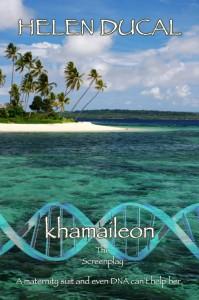 When the ‘perfect man’ disappears with their newborn son Georgina has to try and prove she is the mother and even DNA can’t help her!

Who wouldn’t trade 30 degrees Fahrenheit in London for 30 degrees centigrade in Singapore? But after twelve months of dizzying glitz and glamour Georgina discovers that she has become a product of the 1980s: Disposable.

The duffle coat to Dior, girl meets boy scenario soon becomes an intriguing and sinister thriller.
Malcolm, the epitome of the have it all era, knows that his position and power will provide cover for the perfect crime.
Clarissa is a delicious Dallas character and is Malcolm’s little ‘sister.’
Maria is the Italian family friend, confidante and true chameleon.

Georgina has given birth to a healthy baby boy…only now the baby along with Malcolm, Clarissa, Maria and more importantly the last year of her life has disappeared.
She’s been duped. Georgina retraces her steps only to find that she was never there.
She starts to doubt her own grasp on reality and her sanity. Not being believed is the hardest part.
The situation seems impossible and even DNA cannot help. She must wait almost twenty years before science finally gives her the chance to prove her to be the person she always was.

The mother of their son.

Buy Khamaileon on Amazon Kindle now or see the preview