As soon as the news broke that desperate housewife Felicity Huffman had been arrested for bribery I thought…Lynette…that’s you all over! 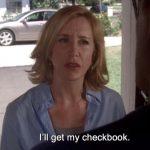 That pushy, nothing is good enough for her kids, desperate housewife and her poor husband convinced that he needs to make mega bucks to be fulfilled, happy, successful…

You really couldn’t make it up.

And how come her husband IRL is not being charged?

Can she plead diminished responsibility and that she was only rehearsing a new role to see how it played out?

Is this method acting gone mad?

Actors gain or lose weight and heaven help us wear prosthetic teeth to convince the audience of the role they are playing. But to what cost to their IRL’s?

It could be an interesting new take on the 5th amendment and don’t forget ‘cognitive impairment’ that one recent case used that allowed the culprit to get off Scott free.

Hmm. Scott free?  It was to do with paying taxes, eons ago, in Scotland, apparently.