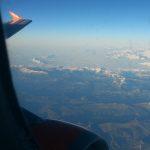 If you fly frequently you will have spotted some if not all of these creatures.

The casually coiffed, adorned with a cashmere cardigan, carrying a large handbag with a roughly folded copy of The Telegraph sticking out.

The lone teenager going to stay with friends of the family. Loafers, no socks. Trying to look aloof.

The Anxious.  Eyes screwed shut for take off and landing. Unwraps sweets as if life depends upon it.

The gaggle of thirty somethings who were up at 5 a.m to apply make-up and jewellery.

The Overloaders. Cannot understand the concept of ONE piece of hand luggage. Well, not for them anyway.

The Russians. Immaculate, composed and silent.

The loved-up teenagers.  Giggling with anticipation. Keep checking their hotel itinerary print out.

The first timers. Nose pressed to the window coming into land, accompanied by Ooh and Aah!

The frequent flyers. Use phone/laptop/tablet during take off and landing. None of the safety rules apply to them. They are in First class (in their heads)

The dedicated traveller with a French phrasebook…size of most people’s hand luggage.

The pain in the arse… holds everyone up by carefully folding their Barbour jacket to place in the overhead locker when there is clearly a LACK OF SPACE for cases.

The retired, we go regularly, couple. We have a little place just outside Monaco.  Why bother. You could lie and say in Monaco. Everyone flies easyJet.

The cute toddler who wants to run up and down the gangway.

The large gentleman who you pray isn’t going to sit next to you…does. The battle between body odour and beer breath makes you SO glad it is a 90 minute flight.

The try hard. Middle aged female who wants to help everyone. Always has just the right change for her herbal tea and turns herself into a hand puppet to soothe the (somebody else’s) fractious child alongside her. 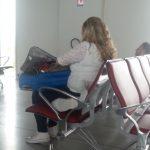 The sensible rich. He reads The Financial Times she reads another…Victoria Hislop saga. He charms. She scowls.

The inevitable three lads. One knows where they are staying. The other two ask how they are getting there from the airport…Is it in the centre, on a bus route, near a train station, 24 hour reception? ( we have been delayed) Defensive argument ensues.

The knowledgeable one, informing his first-timer friend. Pointing out of the window. That’s Nice I recognise the port. Smug. Friend is suitably impressed. 15 minutes later (we have been delayed and taking a pleasant tour along the Italian coastline) No, no. I am wrong. That’s Nice down now, there, look! It is actually Monaco but I wouldn’t dream of bursting his bubble.

The yummy mummy balancing a large Costa coffee, with a ‘baby bag’, a tote bag, a handbag, a stroller with more catches and gizmos than my last car, a juice bottle (baby size)  oh and a baby, whilst calmly chatting on her smart phone.

Now here is a tip for those needing a little more than 1 piece of hand luggage (only you didn’t hear it from me) Always buy something from one of the shops and pay 5p for a carrier bag. You are allowed to take purchases acquired after security.  And no, you don’t have to fish out your boarding pass at every flipping shop. Just say no, politely.

Overcomes 1 piece of hand luggage dilemma by wearing 7 layers of clothing and having 7 pockets in the outer jacket. These can be used for storing stuff.

Pocket  2. Sweeties for take off and landing. Handkerchief.

Pocket  4. Liquids pastes and gels in see through zip bag.

Pocket  5. Evian spray for when they forget to turn on the AIR in the cabin.

Pocket  7. Small purse with coins for bus from the airport. Bus timetable. Never used.  Bus will come when it is ready. Vive la vie Francais.

And a note of thanks from me to easyJet.

I am so glad that during the safety demonstration easyJet have dropped the ‘and breathe normally’ suggestion.

Seriously? Who the f**k is going to breathe normally once those plastic masks drop down in front of your face?

N.B.  easyJet make my commuting life possible. I had to explain this to a waiter on the promenade d’Anglais, when he caught me, hands in prayer position, pointing up at a passing plane.  🙂